It is a thrilling experience when you see a new painting by Arnaldo Roche for the first time. On those occasions you do not know what to expect; will it be a great work? Will it be a small work on paper or will that painting have belonged to a certain time of his career where one color dominated on his brushwork? The following painting measure a whopping 8 x 10 inches. Hahaha. The selected medium was  oil on paper laid on board titled “R” from 1998. 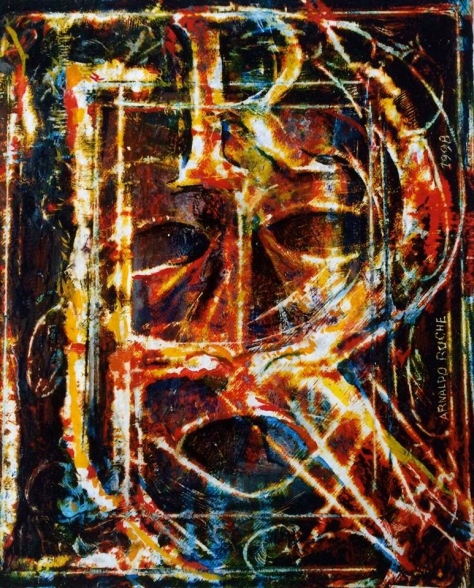 It is thought that the painter Arnaldo Roche Rabel has had three major periods in its history,the red period,the yellow period and the current period where blue predominates. In this small work  all 3 period “BLUE-RED-YELLOW” are incorporated which is impressive as these colors tend to give a very good harmony between them. You can not pass unnoticed that in this painting Roche used his trademark style “Frottage” which it is one of the technique that many collectors tend to look for when buying one of his paintings.

Also we can clearly see how Roche integrates a face where some may suggest a kind of self-portrait which at the end  is not. The face is a ceremonial ceramic “sculptural” mask used by Roche in several of his works as you can see on the picture below.

The letter R is largely exaggerated as a major point of attention in this work which again is juxtaposed with another letter R of a smaller caliber. In the lower medial portion of the painting, we can clearly see a dead man where the mask seems to be doing an expiration of air over the corpse. It is amazing how in such a small piece we can find so many different elements creating an artistic composition. That is why most of the works by Roche will always have a brief touch of magic, mystery and pure beauty with a dramatic artistic punch at the end.

Roche Rabell’s work is one of strong psychological content, in which he undertakes topics related to man and his nature. The artist mostly works portraits, self-portraits and landscape compositions in heroic sizes. The color and multiple textures achieved through the use of techniques such as frottage and impastos, as well as the use of other resources such as writing, result in a proposition strongly expressive and of great intensity.